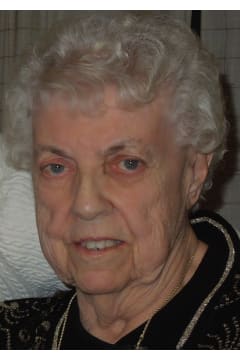 Dorothy was the proud mother of Brian Girard, Karen Girard Harting, and Gary Girard, devoted wife of the late Russell Girard, mother-in-law to David Harting and Deborah Girard, and godmother to her dearest niece, Arlene Almeida. She was blessed with 3 grandchildren, Alyssa Martin, Tucker Harting and Ian Harting, and two great-grandchildren, Delaney and Daxton Martin. Born and raised in Bristol, she was the daughter of the late Donat and Vitaline Quintal, and the last surviving sibling of Blanche Haskins, Edna Proulx, Bertha Coullard, Cora DAlessio and Slim Quintal.

As a working mother of three, Dorothy worked for the First National Stores until 1976. At 52, she joined the Bristol Medical Center as the emergency room switchboard operator until retiring at age 72. Dorothy was a devout catholic and life-long communicant of St. Jean the Baptiste Church.

In 2015, she returned to Bristol as a resident of Franklin Court. Dorothy was a strong, independent woman who will be deeply missed.

In lieu of flowers, memorial donations may be made to Catholic Charities, 1 Cathedral Square, Providence, RI 02903.

Peace and strength to the family of Dorothy. She was a good friend to my mom and us. Our condolences go out to everyone. Jay and Jackie Ferreira
- John Ferreira
To Dorthy family my deepest sympathy to u all..I had the pleasure of knowing her from Bristol Medical Center she was such a great person, kind ..We had some good times at the Medical Center...she was also a pleasure to work with..RIP Dorothy u maybe gone but never forgotten...
- John Ferreira
My condolences to the Girard family. It is never easy to lose one's mother, no matter the years. So may you find comfort in knowing that a mother's love is forever with you. Know that she will continue to smiles on your face each time you think of the fine memories you've made together as a family. In God's loving care Dorothy now rests. John 5:28,29; Psalms 37:29
- John Ferreira
So sorry for your family's loss. We worked together many years ago at the Medical center ð???. Deb C
- John Ferreira