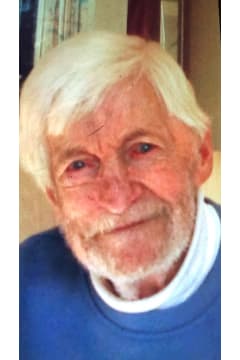 Garrett Wayne Young Otto Kaufman left this world peacefully on February 24, 2021 at 7:24am, at
his home in Bristol, while in the arms of his daughter. He was 91 years young.
A lover of all things in the natural world, he truly nurtured nature. He fed any and all backyard
visitors, including birds, squirrels, chipmunks and an array of woodland animals. He absolutely
considered ALL Gods creatures great and small, to be amongst his very best friends.
A former English professor, he was an avid reader and expert backgammon player. He had an
appreciation for classical music, literature, the theater and all things creative and out-of-the-box.
He also very much treasured his numerous travel experiences. Garrett was proudly a
vegetarian long before it was fashionable. He was a dedicated philanthropist, giving time and
aid to various environmental, animal, veteran and childrens organizations and foundations.
Born in New York City on December 2, 1929, he was the son of Otto Young Kaufman and
Patricia Mallinson Olmsted. Gary spent his childhood in the hustle and bustle of New York City,
as well as at his dear mothers summer camp on Saranac Lake in upstate New York. He
continued to hold a special affection for this inspiring destination of beauty and spirituality as an
adult.
A graduate of the Lawrenceville School in New Jersey, Kaufman became a Sergeant in the U.S
Marine Corps and served during the Korean War. When he wasnt in combat, he was the head
of the radio station at Marine Corps Base, Camp Lejeune in North Carolina. He very much
enjoyed entertaining and informing the troops to keep their spirits high. Garretts love and
commitment to his country was unsurpassed.
He later worked in radio in New York City as a voice artist and producer and enrolled in
Columbia University to study English and Education. Gary met Patricia Sheehy, a well-known
actress of the time, who went by
the stage name Patsy OShea. They were married in Saint Patricks Cathedral in New York on
July 19, 1958. Pat would say it was his many irresistible traits that wooed her. His exuberance
for life in its entirety, accompanied by his phenomenal sense of humor and extraordinary
romanticism ( just to name a few). Pat and Gary captured each other's heart and soul for all
eternity.
They moved to Tucson, Arizona, so he could finish his undergraduate degree at the University
of Arizona and later to California, where he pursued his graduate studies at Stanford University.
Their daughter was born in Santa Barbara, California in 1966. It was then that Garrett began his
teaching career.
After leaving the West Coast, they moved to Dorset, Vermont and then to Andover,
Massachusetts, where he taught at Abbot Academy/Phillips Academy. . Kaufman continued to
teach English throughout the New England and Tri-State region, enlightening and imparting his
love of language and words onto his students. Settling in New Jersey, ever the entrepreneur,
Gary started his own small mail order business and dabbled successfully in real estate, while
still teaching. Garrett and Patricia were longtime residents of Franklin Lakes, New Jersey and
relocated to beautiful Bristol, Rhode Island in 2001 to be more involved in their daughter
Susanas family.
Gary loved his family and friends. His devotion to his granddaughters, who called him Papa, his
daughter Susie and his late wife of 62 years, Pat, was unparalleled.
He is predeceased by his soul-mate Patricia Florentine (Sheehy) Kaufman and by his brother
Richard Olmsted.
He is survived by his daughter, Susana Maria Christiana Burke, son-in-law John L. Burke III and
grandchildren, Callie Shea Burke and Kelsey Shayne Burke, all of Warren, Rhode Island. His
brother, Peter Kaufman, of Marquette, Michigan, his sister Ann Jordan, of Grass Valley,
California and many wonderful nieces and nephews.
A Celebration of Life service will be held on Saturday, March 20th (The first day of Spring), at
Saint Mary of the Bay parish, in Warren, Rhode Island. The doors will open at 9am. Please
arrive by 9:30am to enjoy a slideshow, a family greeting and a chance to view nostalgia. The
service starts promptly at 10am. Family and friends are asked NOT to wear dark colors, as it is
a celebration. Burial with military honors will immediately follow at the North Burial Ground in
Colt State Park, Bristol, Rhode Island. More information can be found at the website of Smith
Funeral and Memorial Services at (wjsmithfh.com).
In lieu of flowers, donations can be made to Mutts With A Mission (muttswitha mission.org) and
Best Friends Animal Society (bestfriends.org).

Gary you will truly be missed . You are a great man and it is a true blessing to have known you and be part of your life. Continue to watch over your sweet daughter and granddaughters.
- Alexine Pena
My dear friend I will miss you very much. My Condolences to Mr. Kaufman family â?¤ï¸?
- Alexine Pena