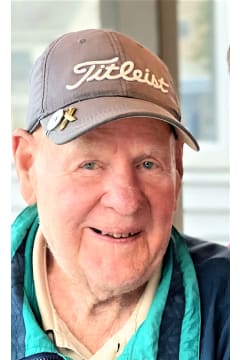 He was the husband of the late Bernice Joy (Cloutier) Sampson.

Born in Providence, RI, he was the son of the late Alexander and Margaret Loretta (Foley) Sampson.

Mr. Sampson had worked as a self employed shell fisherman and carpenter/cabinet maker for most of his working years. He built his own home, many high quality pieces of furniture and several skiff boats he used for shell fishing. He could pretty much recondition or fix anything made of wood. Additionally, he was employed for many years at the former AVID Corporation in East Providence, where he was foreman of the operation that built high quality stereo speakers and educational Mobile Travel Lab trailers. He is a member of the Warren Athletic Hall of Fame as a member of the 1947 Warren High School Class C Championship Baseball Team and State Runner-Up. He enjoyed playing golf and was a member of the St. Mary's/Sundown Golf League for over 50 years until age 90; even recording a hole in one at Swansea Country Club in his 80's. Amazingly his son and grandsons have recorded hole in ones. The rounds of golf played with 3 generations were very special. He most enjoyed the many, many years of traveling with his wife to Marco Island, FL, and all family gatherings.

He is survived by a son, John L. Sampson and his wife Dianne of Warren, RI, three grandchildren, Joy and her husband Keith, Greg and his wife Michaella, and David and his wife Nicole, and six great grandchildren, Brielle, Evan, Emmylia, Collette, Victoria, and Margaret. He was also the brother of the late, Madeline Sweet and Joyce Annunziata.

In lieu of flowers, memorial donations may be made to the Grace Barker Patient Activities Fund, 54 Barker Ave., Warren, RI 02885.