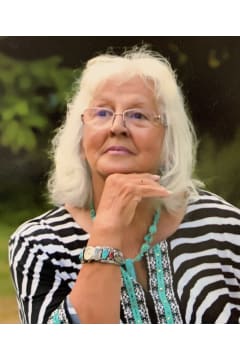 Helene passed into eternal life on Monday March 15, 2021 at the home she made with her daughter in Warren. Love and her tremendous courage were pathways which allowed her to walk on peacefully. Born on July 11, 1933 in Fall River, MA, Helene grew up in the shadow of Notre Dame in the Flint. Though born in the city to a very large French-Canadian family, she and her beloved brother Pete found respite in nature, catching frogs and exploring the wilds of the nearby Watuppa Pond.

She was the wife of the late Roger S. Costa and, once married, became a long-time resident of Somerset, MA, raising her family and caring for pets, gardening, rock collecting, and sewing. She also worked in the family business, L.H. Cook and Cook Lead Hammer of East Providence and Joanne Fabrics, and lovingly supported her husband and children in so many ways. Despite a childhood touched by rheumatic fever, she was extraordinarily athletic, and loved skating, bike riding, tennis, swimming, golf, and all things active and outdoors.

As White Feather she fully embraced her Canadian Abenaki ancestry. An elder in the local Native communities, she participated in the Dighton Intertribal Indian Council, attended numerous pow-wows, and gave generously of herself to all causes of First Nations. She was a highly spiritual person and considered her loving relationship with Jesus to be a given, which augmented her bond with Native faith traditions and the honoring of Nature. She drew people to her, making a circle of love and caring which welcomed all.

She leaves her loving children Suzanne Baldaia Mayo and husband Ernest G. Mayo of Warren; Kevin R. Costa and wife Alison of Swansea; and namesake Helene Costa and husband Rich Brodeur of Somerset; grandchildren Shayna Costa of Salem, MA; Dusty Cyr and wife Jessica of Fall River; and Michela Joubert of Pawtucket, RI. She also leaves behind both Costa and Lavoie family brothers and sisters, brothers and sisters-in-laws, and numerous nieces and nephews. She was pre-deceased by her parents Domenic and Marie (Heroux) Lavoie.

Should you wish, donations in her memory to the First Nations Development Institute would be most welcome. https://www.firstnations.org A Celebration of Life will be held at a later date.

Iâ??m so sorry to hear of momâ??s passing. I have some really great memories with her and am honored to have been given the chance to get to know her. She truly was an amazing lady and knew how to make all of us smile and laugh. -Katie Tadlock
- Carissa Marie
So sorry for your loss. Helena was a kind soul and it was an honor to have known her. You are in my thoughts and prayers.
- Carissa Marie
Our deepest sympathy to you and your family Love Guy and family
- Carissa Marie
My deepest condolences to the family. Having worked with her daughter and namesake, Helene, I heard many stories about her momâ??s spirit and joy for life. Her kindness and sense of humor shined through in those stories her daughter would tell me. Her faith and compassion were clearly evidence to those around her, and she undoubtedly made the lives of those she encountered brighter.
- Carissa Marie