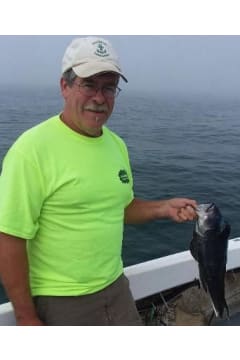 Rehoboth Jon Richard Pomfret, 59 of Rehoboth, MA. died Wednesday March 3, 2021 at home after a long illness.
He was the husband of Joanne (Kelley) Pomfret.

Jon was born in Fall River, a son of Carolyn (Douglass) Pomfret of Swansea, and the late Richard Pomfret.

He was a Welder and Crane Operator for the Cardi Corp., for many years.

Jon was a graduate of Wentworth Institute.

He was a Rehoboth resident all of his life, and had attended Christ Church in Swansea.

Jon enjoyed fishing, deer and goose hunting. He was a member of the Rumford Hunting and Fishing Club.

He joined farming and grew the best sweet corn,, he also enjoyed cooking with his friends.

Jon also enjoyed spending time with his grandchildren, and hanging out in the barn with his friends.
Jon was also a New England Patriots Fan.

Besides his wife and mother, he is survived by his children Matthew R. Pomfret of Warren and Casey Harrison of Swansea.

Mr. Pomfret was the brother of Libby Pomfret on Dunbarton, N.H. and Bonnie Pomfret of Wayland, MA.

He was the grandfather of Lillian Harrison and Olivia Harrison. He was also survived by several nieces and nephews.

A future Celebration of his Life will be held at a time to be announced.

Calling hours and flowers are omitted. Gifts in his memory may be sent to Wounded Warrior Project, P.O. Box 758516, Topeka, Kansas 66675-8516 or www.woundedwarriorproject.org.

Joanne, Matt, Casey and Carolyn, We are so sorry for your loss and had just heard this sad news. Please know we are thinking of you in your time of sorrow. Jon always had a smile on his face, something nice to say and enjoyed life. He remained positive and upbeat throughout his illness. We will miss waving to him across the yard, catching up on what the kids and grandkids are up to and sharing a cold drink. Love, Gene and Melanie
- Melanie Curley