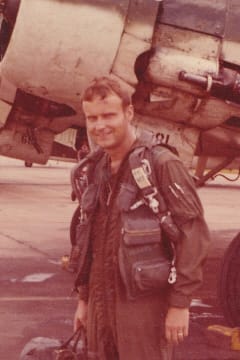 Robert M. Gourley, 79, of Barrington, passed away unexpectedly at Miriam Hospital in Providence on Wednesday, October 13, 2021. The husband of the late Susan L. (Mazo) Gourley, he was a long-time resident of Barrington and was well known and respected by many people throughout the area.
Born in Pawtucket, Robert spent his early years in Providence, having attended and graduated from Hope High School which is where he met his wife, Susan. After graduation, Robert enlisted in the US Air Force, beginning his long military career. He did seven tours of action during his enlistment to Turkey, Japan, Germany, Turkey, Japan, Thailand and, finally, England between 1960 and 1980. He was the recipient of several awards, including, the Distinguished Flying Cross, 3 Air Medals, 2 Meritorious Service Medals and 1 Air Force Commendation Medal. After retirement from the military, Robert went on to work for Industrial National Bank and later, Bank Boston and Bank of America for 20+ years. An Eagle Scout, himself, Robert worked with scouts earning Eagle rank and was also a leader within a local Cub Scout pack. During the 80's and after his retirement to present, Robert went on to coach the boy's and girl's Hammer Throwing team at Barrington high School where he was anointed the "Hammer Coach Guru of the World". He was also a well-respected High School track and Field Official and a USATF Master Level Official. He loved coaching, even having several articles written in his honor. After retirement, it was "Hammer, Hammer, Hammer!".
Robert is survived by his daughter, Lisa Gourley of Barrington; his son, Bob Gourley and his wife Janet Jeun-Gourley of Jersey City, NJ; his sister, Marsha Dalton of FL and his grandson, Ben Gourley. He was the brother of the late Hugh Gourley III of ME.
Arrangements are with Smith Funeral and Memorial Services, 8 Schoolhouse Rd. Warren, where the family will receive relatives and friends, Thursday, November 4, 2021, 5-8pm. A graveside service will be held Friday, November 5, 2021 at South Burial Ground, 39 Sowamsett Ave. Warren at 10am. Robert was dedicated to Track & Field and regularly purchased equipment or shoes, or paid entry fees, to help kids stay involved with the sport. A fund has been established to keep that effort alive. In lieu of flowers, donations can be made to: Bob Gourley Throwers Equipment Fund, make checks out to: Furey Athletics, 204 Waseca Ave. Barrington, RI 02806. For tributes, please visit www.wjsmithfh.com .