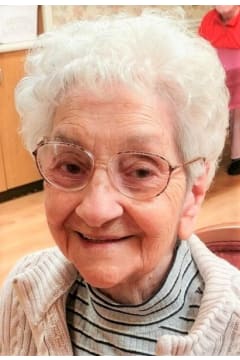 Bristol - Theresa (Testa) Morra, 99, formerly of Bristol, died Sunday March 21 2021 at St. Elizabeth Manor, in Bristol. She was the loving wife of the late Frank Morra.

Born in Barrington, Theresa was the daughter of the late Albino and Maria (Jiacovelli) Testa.

She is also survived by her sister Dora Iozzi of Cranston.

Mrs. Morra has been a Bristol resident since 1948, coming from Barrington and was a parishioner of Our Lady of Mt. Carmel Church.

She was a homemaker for many years and spending time with her family. She was an avid reader, who also enjoyed crocheting and cooking.

Theresa is survived by her children Marie and John Aguiar of Barrington, RI., Frank Jr. and Melody Morra of North Carolina and David and Jessica Morra of Pennsylvania.

She was also the great grandmother of Anna, Aaron Jr., Lydia and Isabel and she was also survived by many nieces and nephews.

Her funeral services will be private.

She was buried in Gate of Heaven Cemetery, East Providence. Calling hours and flowers were respectfully omitted.