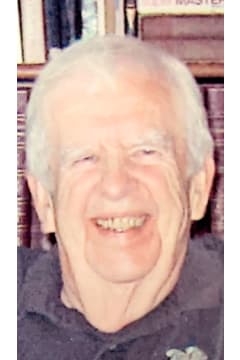 Jack was born and raised in Washington DC, the eldest of three children of Donald and Mary (Flaherty) Galligan. He was a gregarious child who concealed his mischievous side with superb scholastic achievement. He graduated from Gonzaga College High School and studied at Georgetown University and Manhattan College, where he earned his Bachelor of Science degree in chemistry. He conducted research at Emory University and at the Catholic University of America.

While in New York, he met Audrey Field, a young schoolteacher. The two married on December 27th, 1958, started a family nine months and one day later, and never looked back. They raised five children in Washington, DC, Weston, Massachusetts, and Little Compton, Rhode Island. Their family life focused on education, travel, visits with dear friends and relatives, and lots of laughs.

Jack pursued a career as a chemist and inventor, earning several patents for the Gillette Company. He was at Gillette for his entire career, from 1957 to 1991. As Jack rose from chemist to vice president to group director, he made the most of the travel the job entailed, bringing along Audrey and even the children whenever feasible. He also greatly widened their circle of friends to include other chemists and related professionals from around the globe.

Jack loved his job and used his technical skills in the myriad home maintenance projects he took on over the years. In retirement, he served as a judge for the Jacksonville, Florida High School Science Fairs. Deep into his Alzheimer's disease, Jack's knowledge of what chemicals could remove which stains from any material were among the last bits of knowledge to slip away.

Jack endeavored to help others as much as possible throughout his marriage, in the family home, serving on technical committees and alumni organizations whenever a need arose. His family and friendships were most precious to him. Jack accomplished much in his career and chose to retire early to give himself and Audrey as many years as possible to enjoy an active retirement full of travel, friends, and grandchildren. They particularly enjoyed winters on Amelia Island, Florida.

Jack's and his family's lives took an unfortunate turn in 2012 when Audrey suffered a severe fall and traumatic brain injury. Grateful that the couple had enjoyed many years of retirement to that point, Jack's resolve was tested as he was thrust into the role of caregiver for Audrey, who would never be the same. He was a daily visitor of his wife, took no sick days, and got to see her through every weather emergency, every day, until COVID restrictions barred his access to Audrey for over a year. Neither Audrey nor Jack understood the reasons for the separation, and great efforts were made to reunite them as COVID eased. They were ultimately able to live the last months of their life together in the same nursing home. Decreasingly aware of his surroundings, Jack clung to the knowledge of Audrey and their marriage every day, knowing that if he were sitting holding her hand (with much instruction from her), he was a happy man.

We hope that in Jack's memory, those who cared for him make a particular effort to appreciate those moments we have with each other.